In the last couple of years Flathead Fords have been making a really big comeback. They are less of a fad and Traditional Hot Rodding is on the rise. More people are interested in buying and building Flatheads and I am here to help! You need to know how to identify the blocks on these motors because a lot of the bolt on parts are interchangeable and can confuse you. First thing you need to understand about the Flathead is that Henry Ford was still alive during their production, and was still trying to create the best product he could. If Henry found a better way of doing something he would make the change mid year. Also, serial numbers weren't standard practice yet and more than half of the blocks made had no numbers or letters on them to identify them with.

Officially, there were 20+ different models made. For example, Ford would change the type of distributor the motor came with and the official designation would change. In this article we are going to keep to the basics and keep it simple.

The 1932 Block was the first v8 production for Ford, this was a one year only block and had a lot of problems. As with most 32 parts they are rare, but even more rare than other parts of the car because the ones sold were swapped out for the 1933 blocks.

The 1932 Block had a very small hole for the fuel pump pushrod without a vent in the very rear of the block, you can compare this to the later block pictures and notice a few quick differences. This style of non vented passage was used from 1932-1934. The best way to identify the blockt to be specifically 1932 is the vertical coolant drain shown in the second picture below. Also, from 1932-1936 the blocks had poured babbitt bearings for the mains. 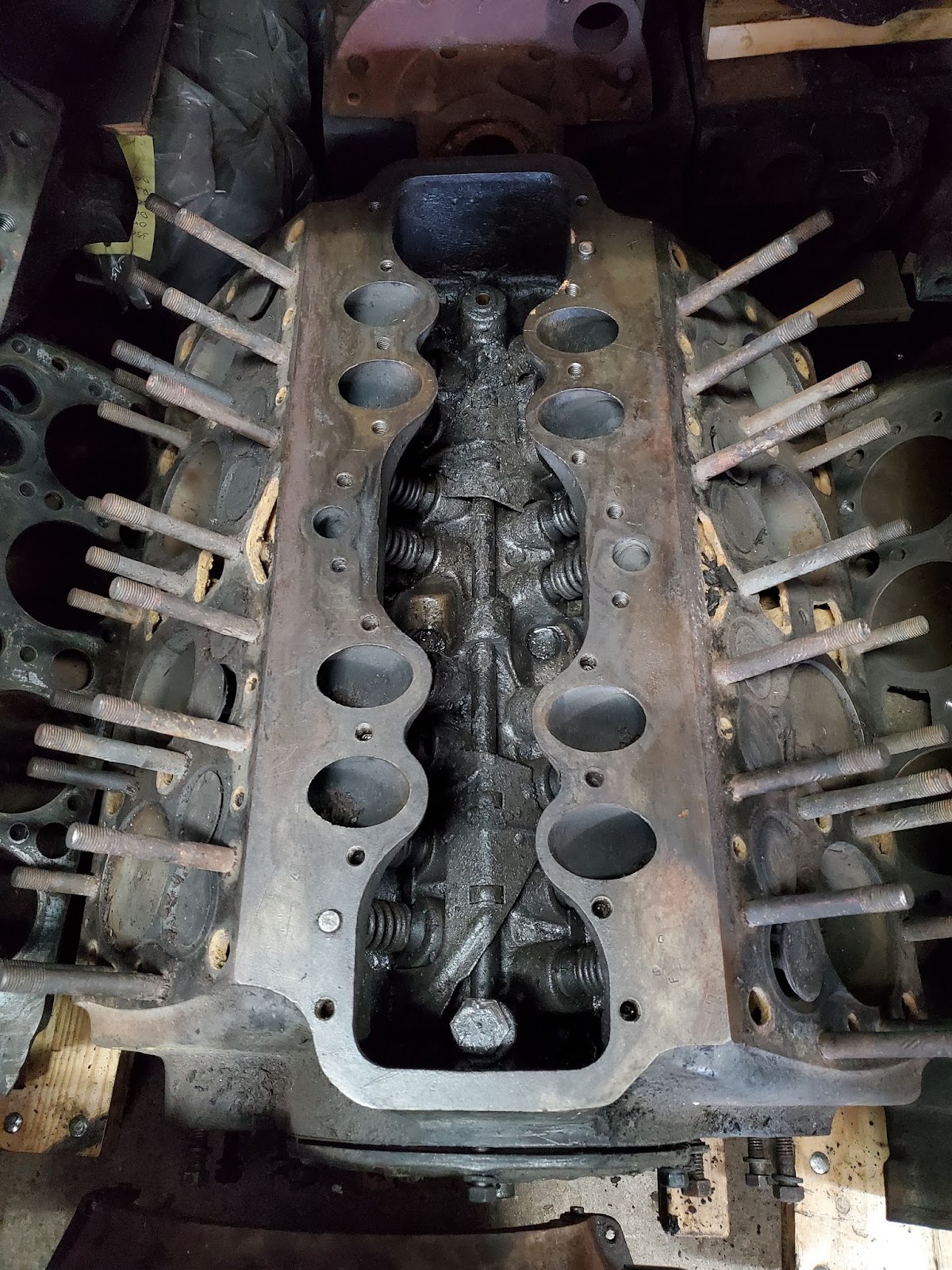 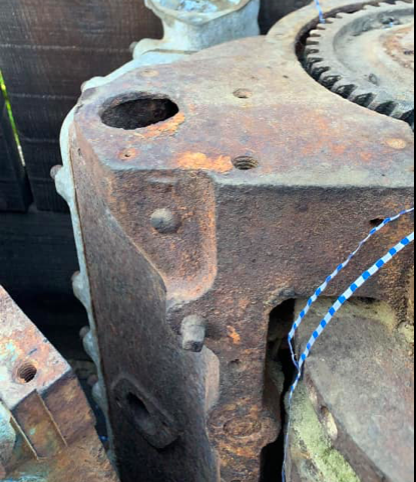 From 1932 to 1937 the blocks had 21 studs to hold down each head, here you can see a 1937 block as the example. The fastest way to see if it has 21 studs is to count the studs in the middle of the block where the center coolant passages are. On this one we can count three in the middle, making it a 21 stud. Also take note of the center coolant passages and their triangular shapes as these will change and be noted later in the article. 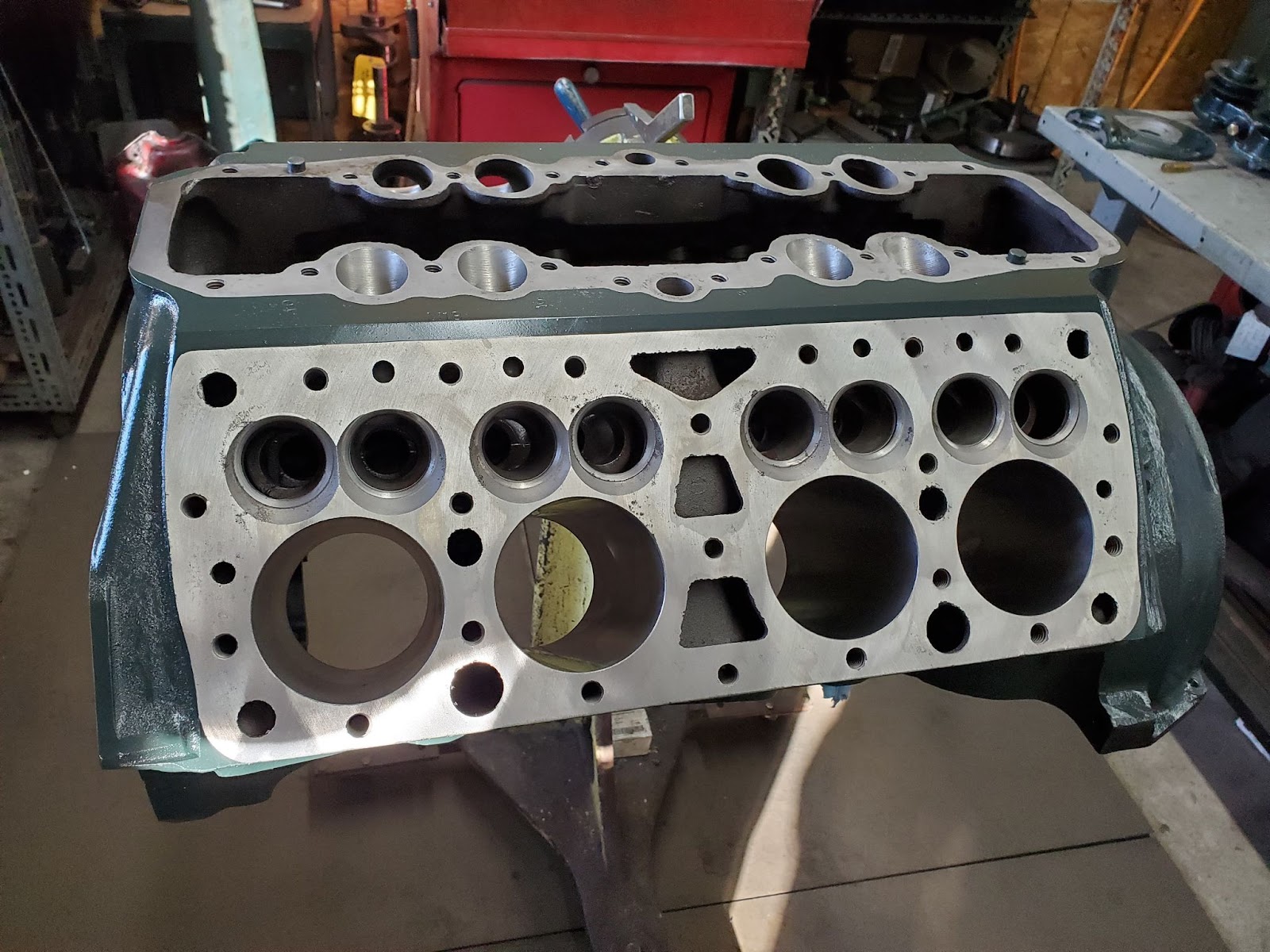 From 1932 to 1936 1/2, the water pumps were strictly in the heads and the face of the blocks are smooth where the later blocks had holes for the water pumps. 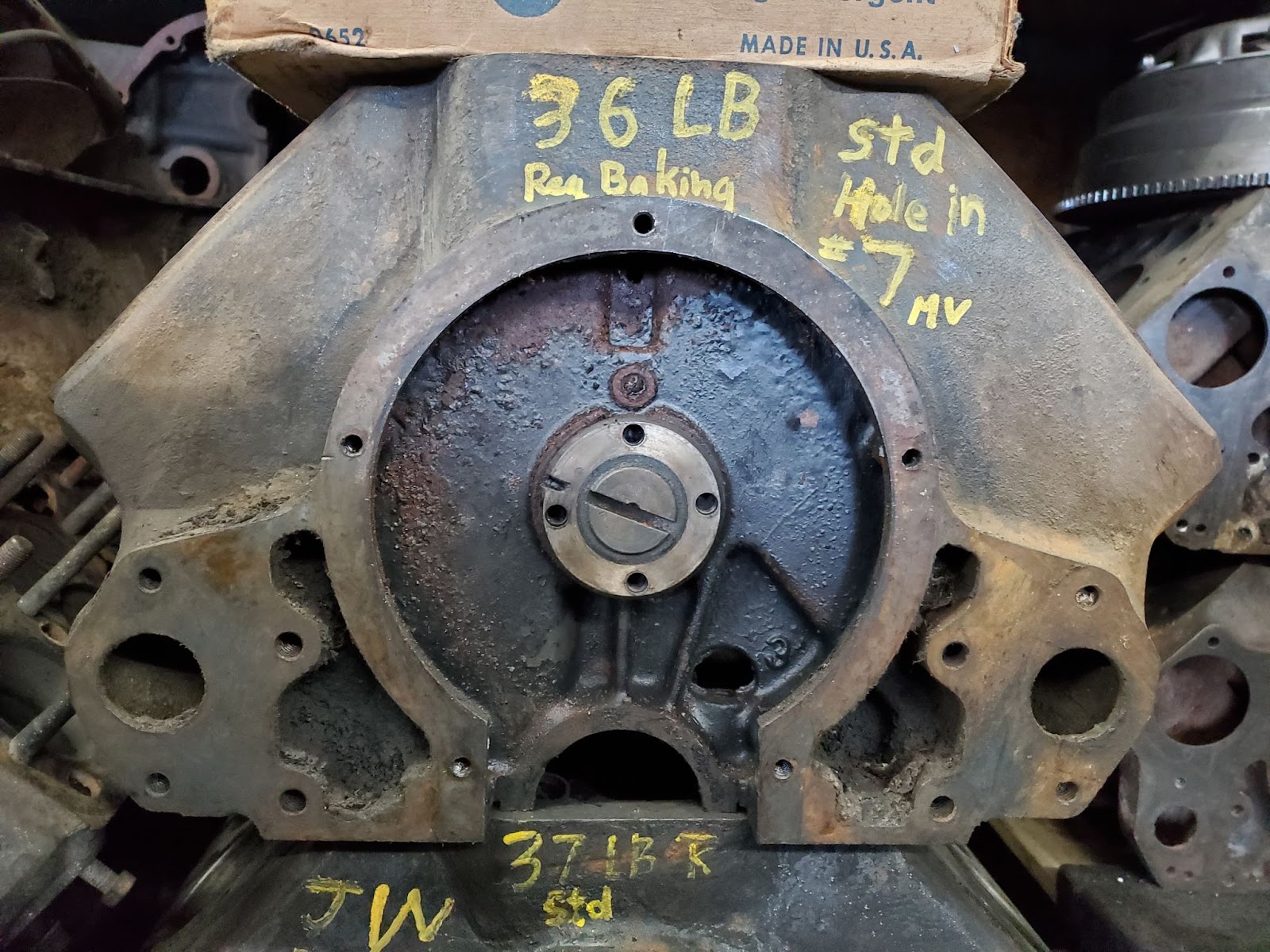 In 1935 Ford added a vent to the fuel pump push rod area in the very back of the block, compare this picture to the very first picture in this article and notice some differences. 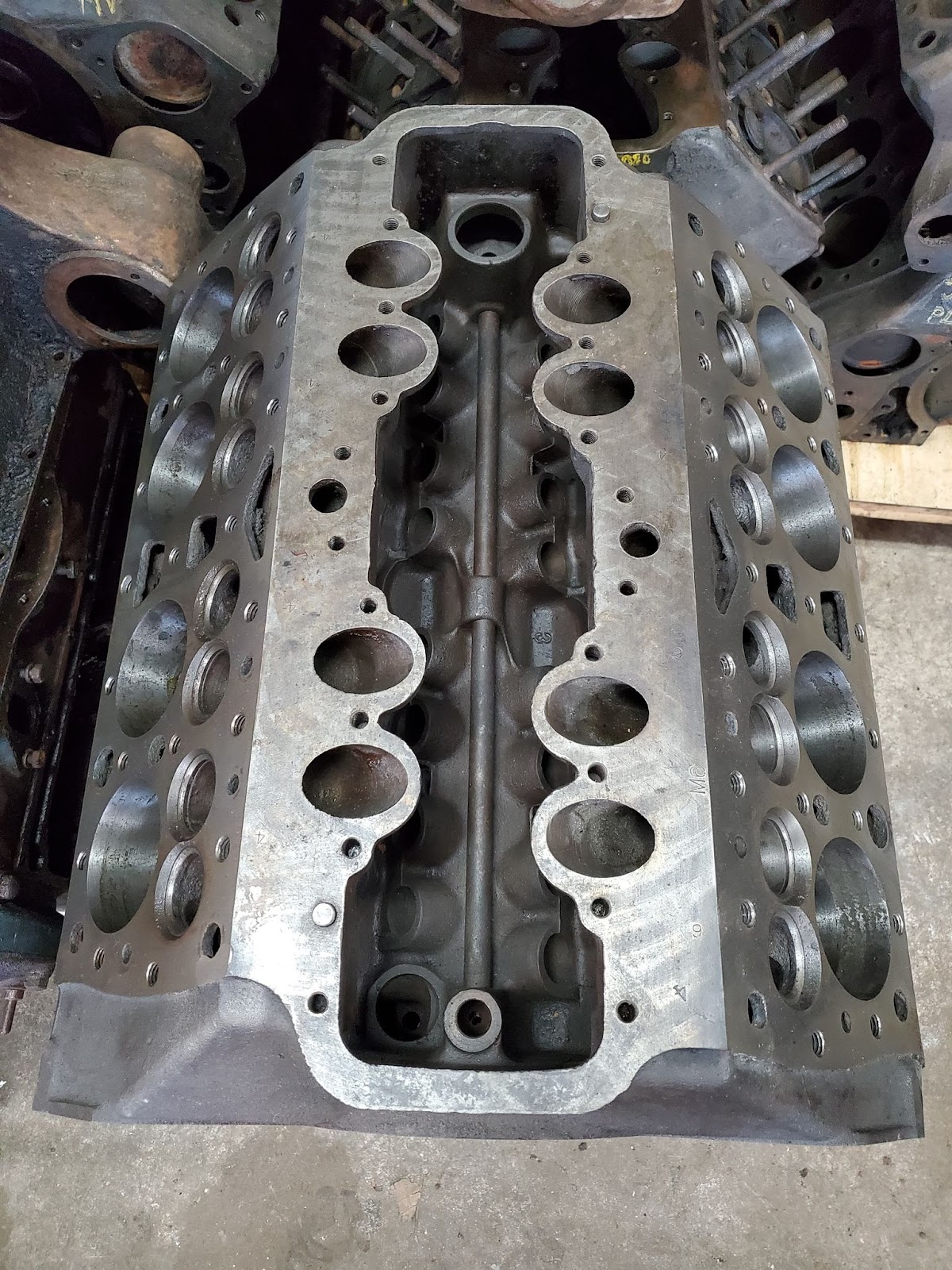 In the later half of the year of 1936, Ford changed production and started to put the water pumps  in the block, that's why we separate the 1936 and the 1936 1/2 blocks as being different as among other changes to bolt on equipment, these changes were implemented in 1937 vehicles. These engines were the first to get away from the early style of poured babbitt main bearings. 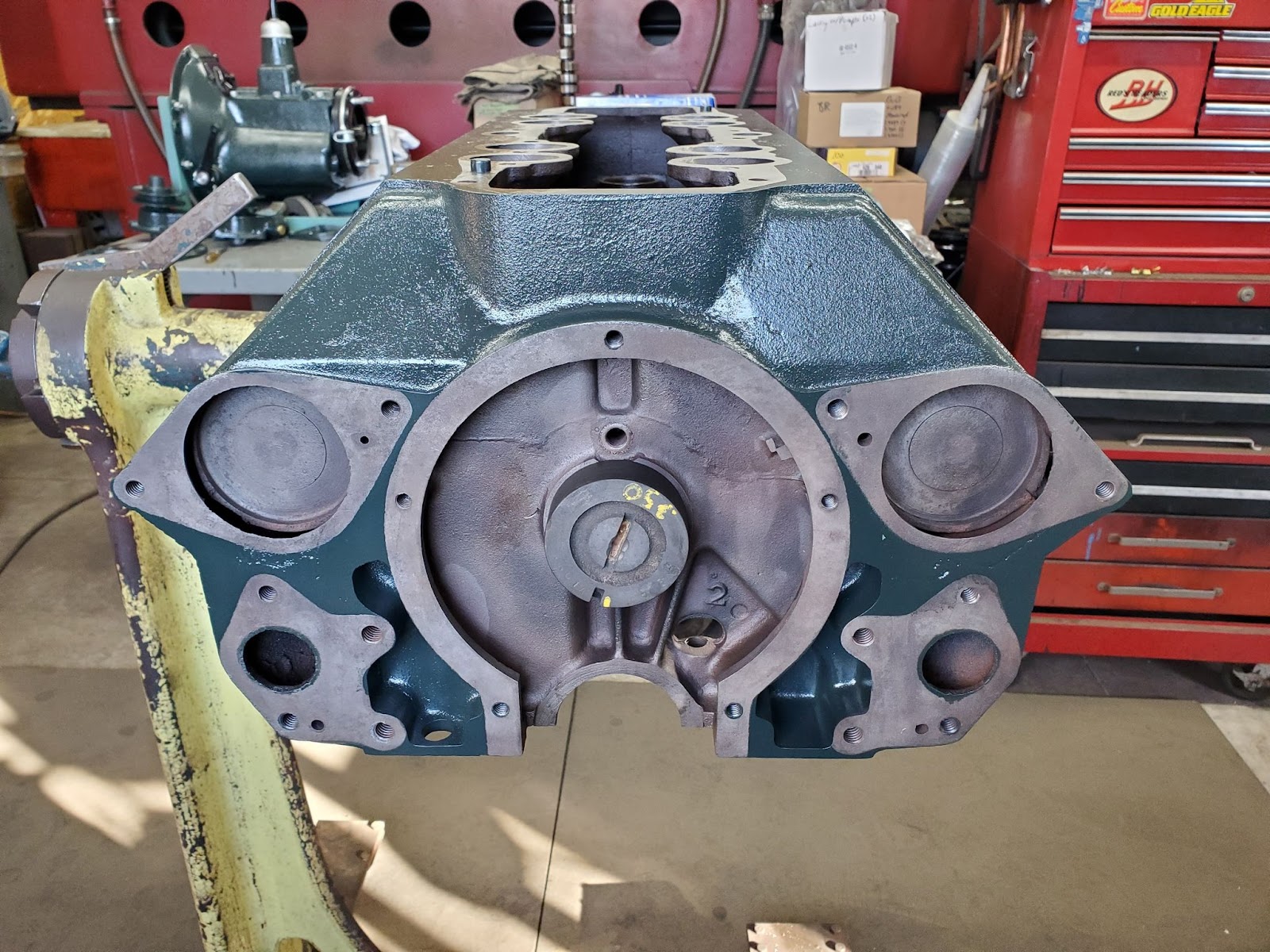 1938 another significant change was  24 studs used to hold down each head. Easiest way to check for 24 studs is count the studs in the center with the center coolant passages like the earlier motors, here you see two studs. Note the shape of the center coolant passages between these first and third pictures. The first picture below is the 99A which is a 1939 Mercury block, it has a round passage in the center of the coolant passages. The 99A is one of the few early motors with an actual designator on the block, in the second picture below you'll see "99" stamped on the intake surface. The third picture below, the block still has the earlier triangular center passage, which makes this block a 1938-1939 Ford motor. 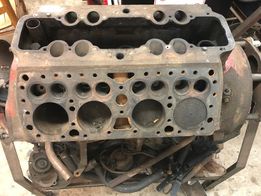 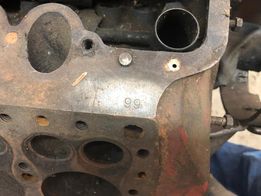 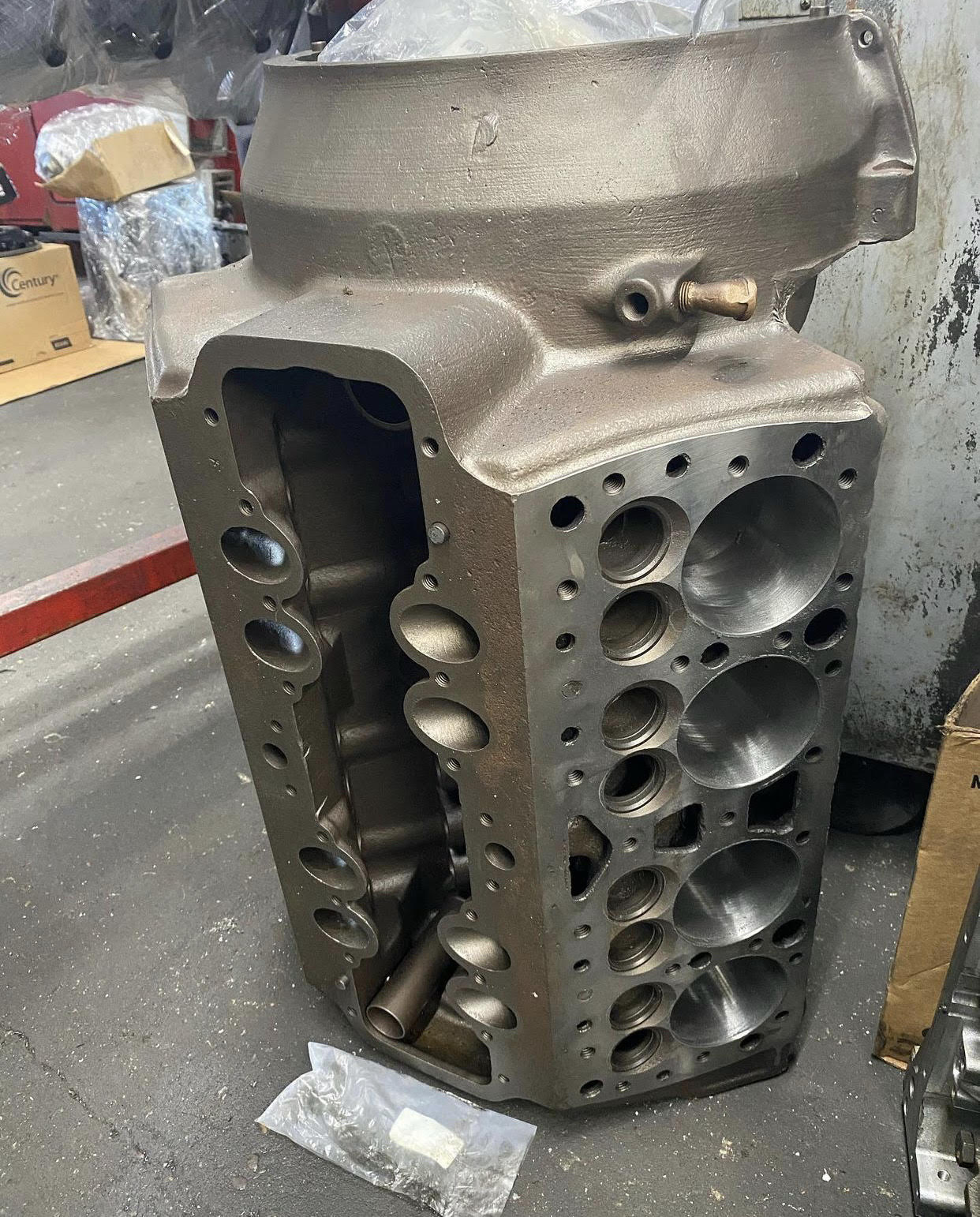 I wouldn't be doing you justice if I didn't point out the fact that from 1932-1942 that the integrated bell housings had no designations marked on them like the pictures above and this picture below. Note the center coolant passage, making this motor a 1938-1940 Ford block with aftermarket relief cuts between the cylinder and the valves. 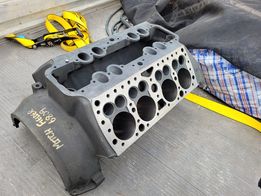 1941 was a one year only block here in America, below you can see what's referred to as "raised intake surface". This was only done in 1941 and the surface wasn't raised but rather the shoulders were lowered, this had no effects and was changed back in 1942. I would also like to take a moment to show you numbers on the top of the bellhousing, they are often confused as serial numbers. The Ford Archives tell us that these are the numbers for the castings and when deficiencies were seen in the blocks they knew what casting to pull for repair or replacement. Some countries outside of the USA would add to the casting numbers, Canada for an example would have a "C" before the casting numbers signifying it was a made in Canada block. 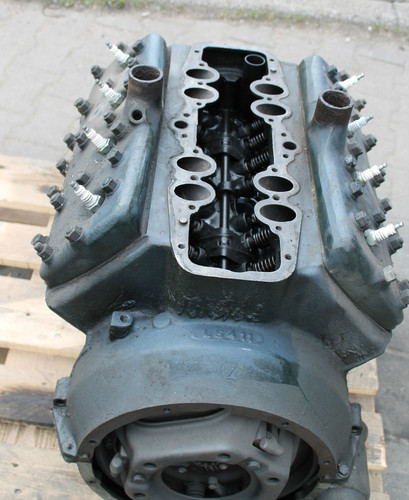 In 1942 there were no significant changes in the bare block other than the raised intake surface was gone. 1942-1945 were considered to be war ration motors and the feww sold were mixed matched leftovers. In February of 1942 Ford started building vehicles and equipment for WW2 and civilian production halted until 1945.

1946-1948 Ford built one of the most recognizable Flathead blocks, the 59 series. I call it the 59 series because there were so many different designations in a 3 year window. They are easily identified with the "59" casted into the integrated bell housing, but a lot of people fail to notice the changes in the center coolant passages that are now circular in the middle and bottom, take a note of the top coolant passage in the center, this changes in the next model . A few versions to note are the 59L and the 59Z. 59L was a factory relieved block and some of the 59Zs were also relieved. These were the only blocks to come from the factory as relieved. Relieving became a common performance upgrade and many different blocks today can be found relieved. Let it be known that the 59Z is blurry in the Archives and some blocks were not relieved depending on location.

Next up was the 8BA ad 8RT blocks, the integrated bell housing was replaced with a bolt on bellhousing making the transmission options greater, this is shown in the third picture below. As far as the bare blocks are concerned, there are no significant identifiers between the 8BA and 8RT. The BA model was used in cars and the RT model was used in trucks. Below we can see the top center coolant passage is now more rounded, also in the rear of the motor we can see new coolant passages in the second picture. 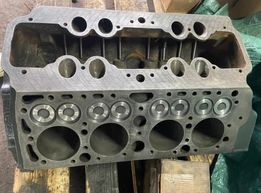 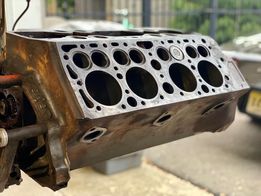 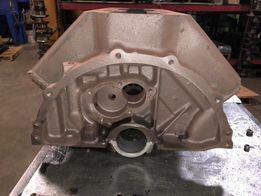 In 1954 in America, Ford went to the overhead valve Y block and the production of the Flathead was over. When it comes to the V8s there were two more motors not shown above, the V8 60 produced from 1937 to 1940 and had 17 head studs, and the 337 Flathead "Big Block" from 1948-1951 with 27 head bolts. This was just a small window into the more significant and easiest to see differences between the bare blocks. Let's talk about the differences of the bolt on parts below in the comments of this article to learn more! Thank you for taking the time to read this, feel free to ask questions also, when you're done get back in the garage and "Get Your Shift Together". 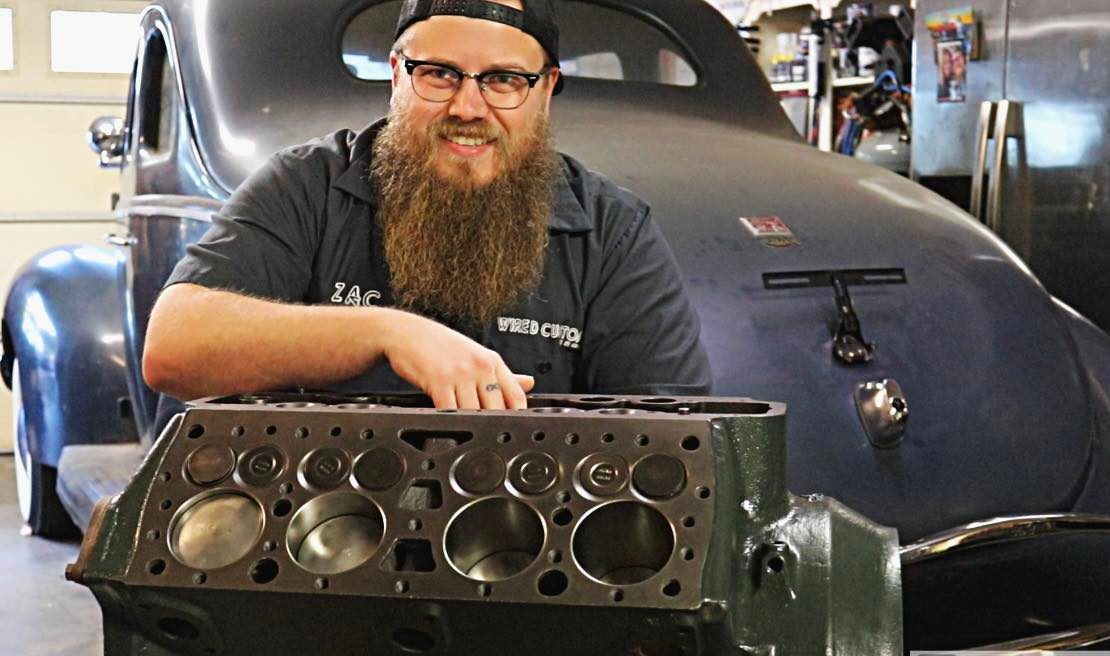 William Smith, if you already have a motor then it’s just a crankshaft and heads away from being a Merc motor.

Mike Haley, shoot me a message on Instagram at WiredCustoms.VA or send me a message on Facebook Wired Customs and I can help you out, much more to talk about than what can fit here in the comments

Verne thanks for the added information!

Thanks Kevin Henry! With the number of facts for Flathead Fords there is an equal number of “if ands and buts” Flatheads are hard to pin down, automotive production was still considered to be like “The Wild West”

Thanks. Just when you think you have some knowledge, you learn how little you know.

The 1932 thru 1934 blocks were “non-ventilated”. They did not have the round tube at the frond of the valve gallery. That fed down to a little stamped piece on the front of the pan. The sides of the 1933-34 pans were straight, then in 1935, the pan sides bulged out at the back.

Hello Zac, I would like you help with removing head studs from my 59AB block to accommodate some Offy heads the bottom row & second row need to be removed.. Your ideas ?? do I need to pull the crank ,rods, ??
Thank You
Mike