How to install Heads on a Flathead Ford

Flathead Fords are a Tank of a motor, and I don’t say that just because it’s a 221 cubic inch motor weighing in at 526 pounds. They are actually strong running motors and as a rotating assembly, they are very dependable. Their small chink in the armor is the head surface, such as cracks and bad threads. That being said, you need to do your due diligence when replacing the heads or installing new gaskets! 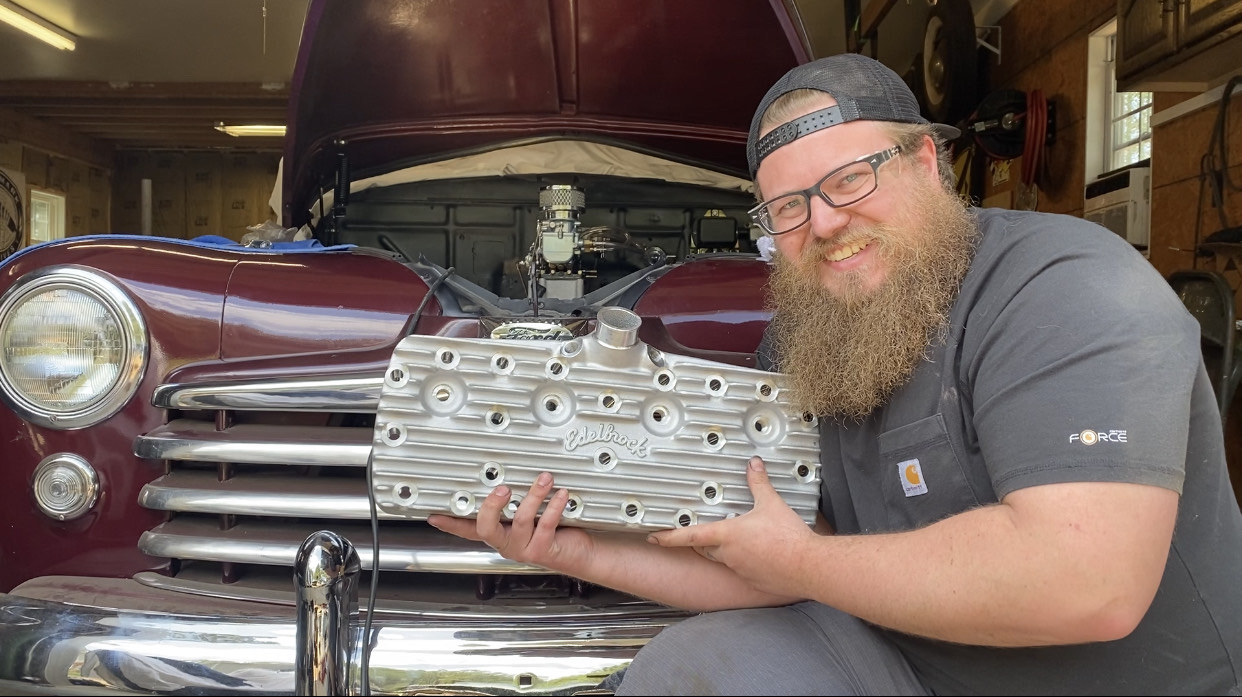 I will be replacing these cast iron heads for finned aluminum Edelbrock 1125 Heads on a running engine, so let’s start the process.

Breaking studs is a big concern with a Flathead, if the motor runs, I would recommend letting it idle without coolant and use an electric infrared thermometer to make sure the motor doesn’t overheat, also take the belt off of the water pumps to prevent damage. I bring it up to 200 degrees Fahrenheit then let it sit for an hour to cool back down. I like to use this just to heat things up, if it was a non running motor I torch the nuts and apply crisco while it’s hot, I’ve been very successful with these methods, always allow time for cooling and of course be careful if you’re removing aluminum heads, electric heat guns can help as well. Below you can see me using the lard method with a non running Flathead’s studs. PS it smells like you’re cooking BACON! 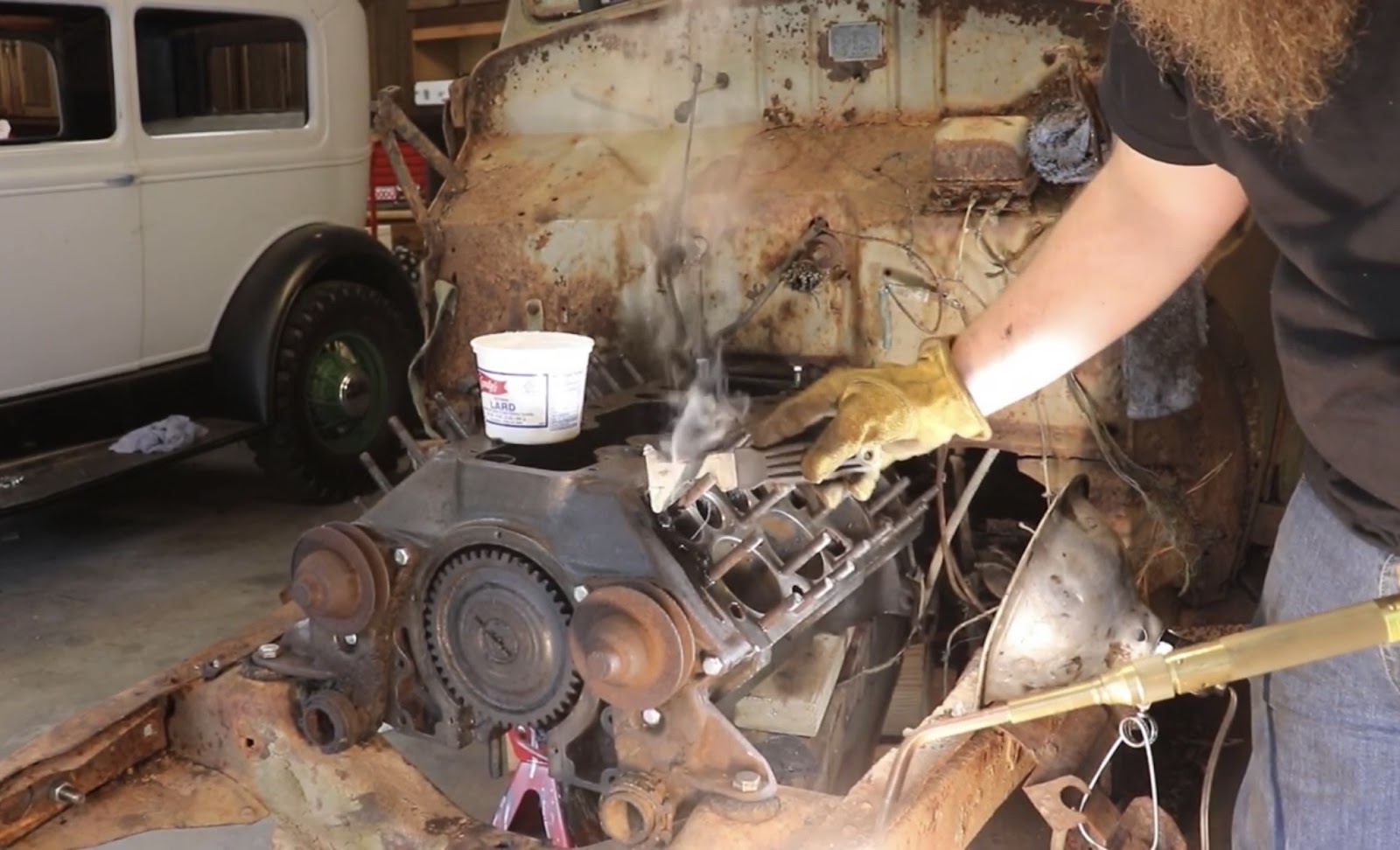 I have never warped heads by taking the nuts off in any certain order so I usually start with removing the oil filter housing and anything else bolted on with the heads such as a coil bracket. 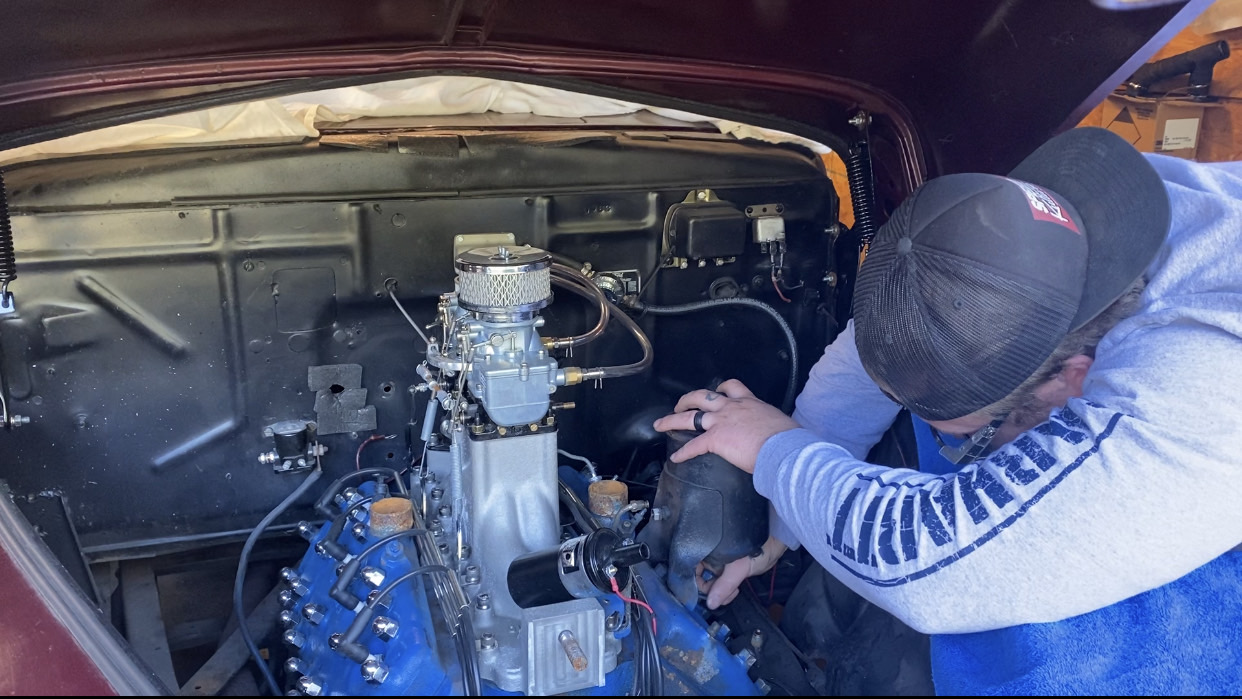 Next I remove all the nuts, I break them loose with a breaker bar so I can feel each one, with enough experience and patience you can feel when a stud is wanting to brake, so be super patient, heat, penetrate with oil and lard and repeat if need be. Taking your time to keep studs from breaking is a lot easier then extracting a broken stud. Never use an impact to break it loose. Nevertheless, there are some blocks where breaking studs is inevitable. 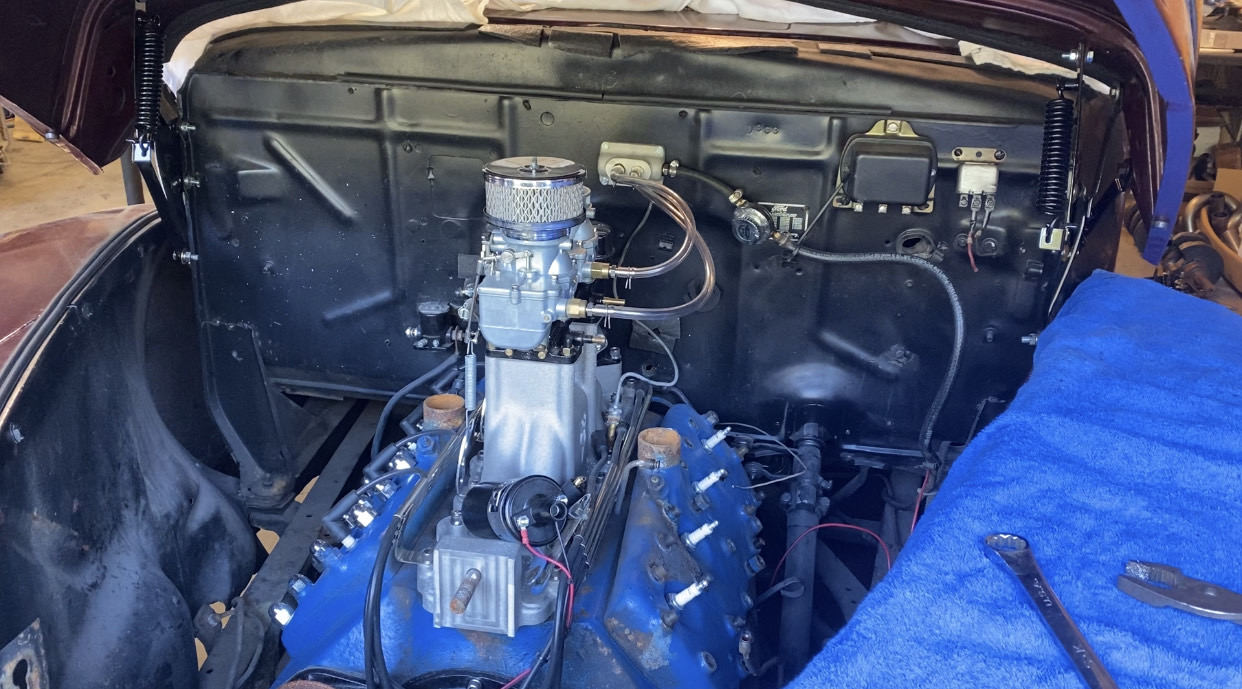 Next I put one nut back on right in the center of the head, just a couple threads. I hook up the starter and crank the motor over a couple revolutions. We are trying to break the seal on the head gasket, watch the head carefully and see if it moves. Don’t be afraid to get out the rubber mallet and give it some love taps in all directions to entice it to let loose. Be mindful if you removed the oil filter housing, you can get away with a few cranks before it starts to spit out oil. 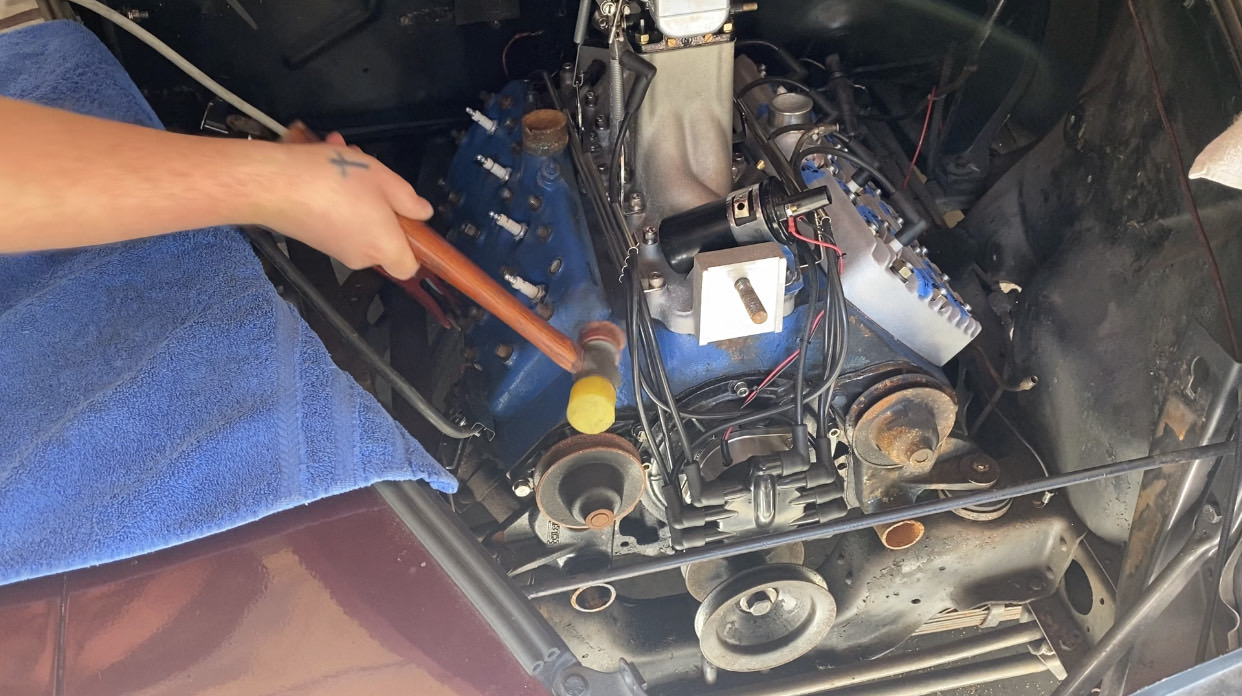 Next you’ll have to try to remove the head as straight as possible, crooked slightly in one direction and the head will get stuck on the studs. Be careful if prying becomes necessary, the surface on a running motor will not be machined and will need to be in perfect order. Wood and plastic wedges can be helpful. 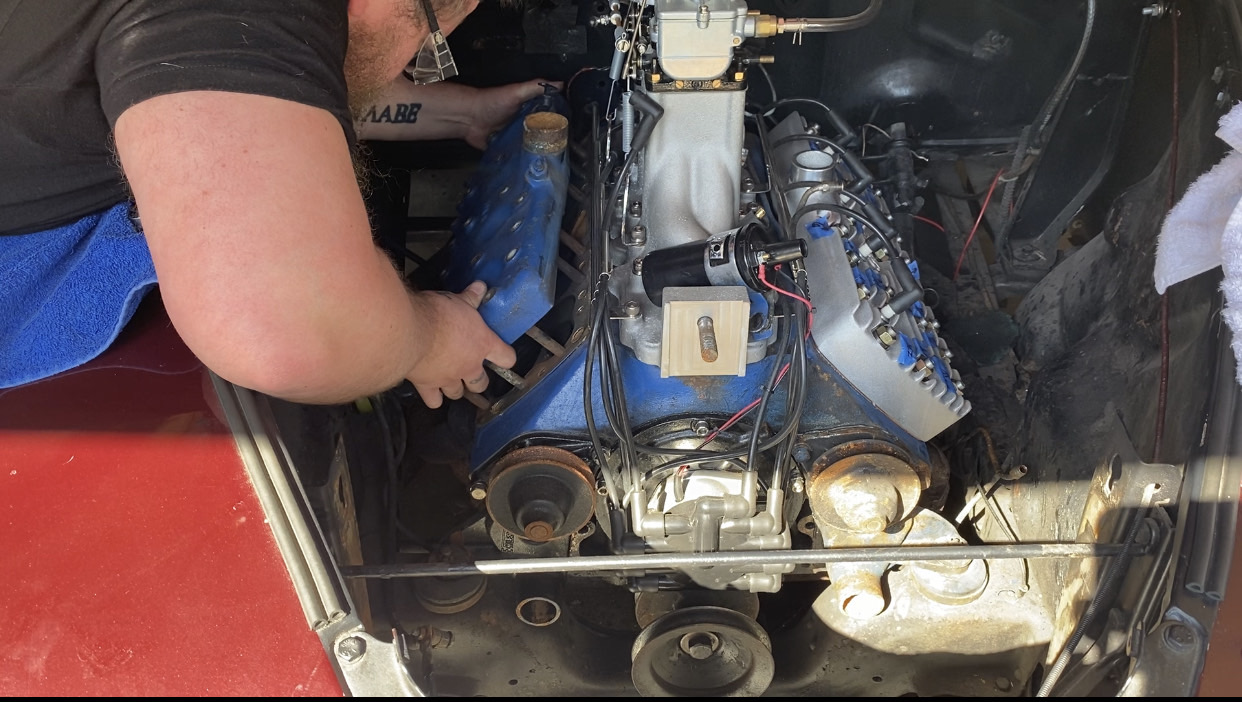 Remove the old head gasket, and here on out the process needs to be as clean as possible, so I start with vacuuming any debris from the head gasket. Also, I try to vacuum out as much coolant as possible from the block. 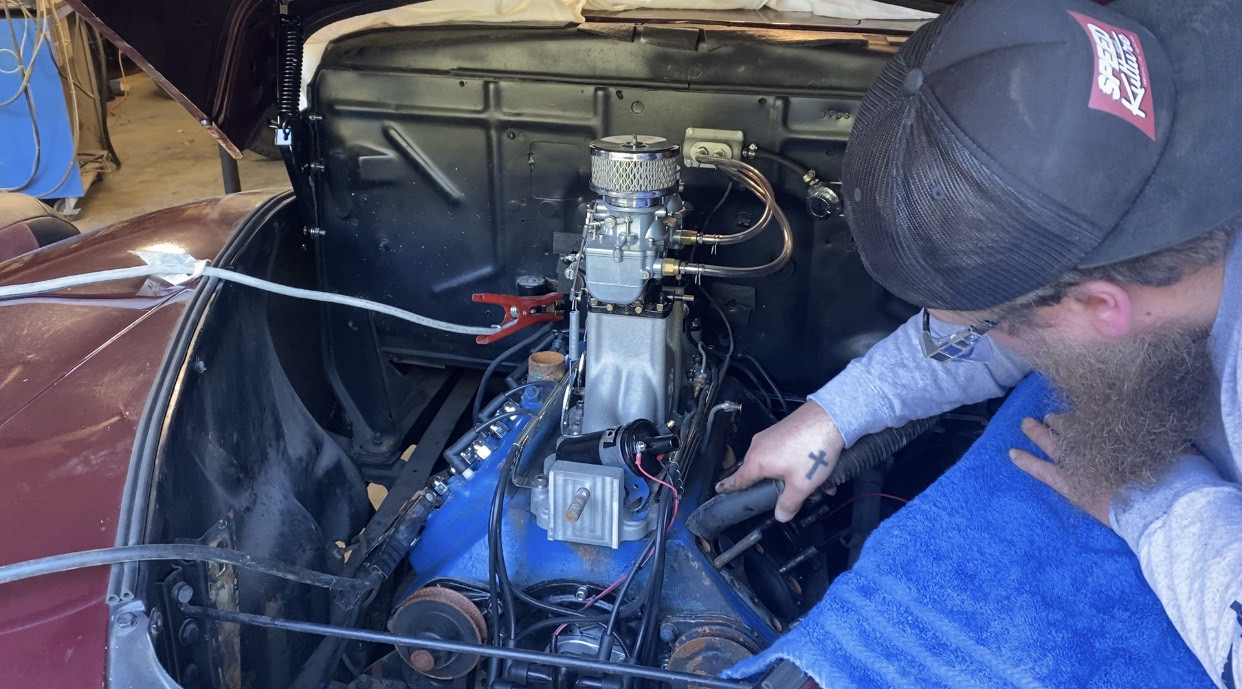 Next we are going to remove the studs so longer studs can be inserted for the larger aluminum heads. If you are going to use stock cast iron style heads I would still suggest replacing the head studs with new ARP studs. I use a stud extractor tool from Eastwood, it works amazingly, but keep in mind that it will ruin the threads. If need be, use heat and the crisco/lard method to break the rust and corrosion loose. 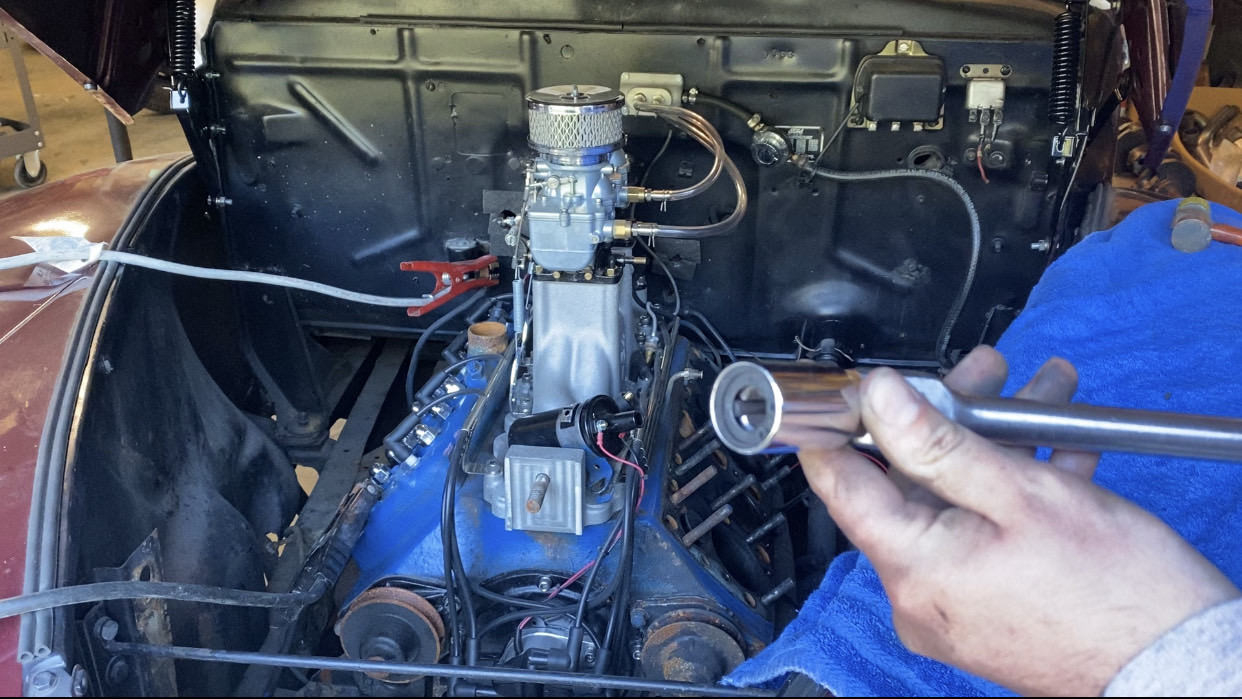 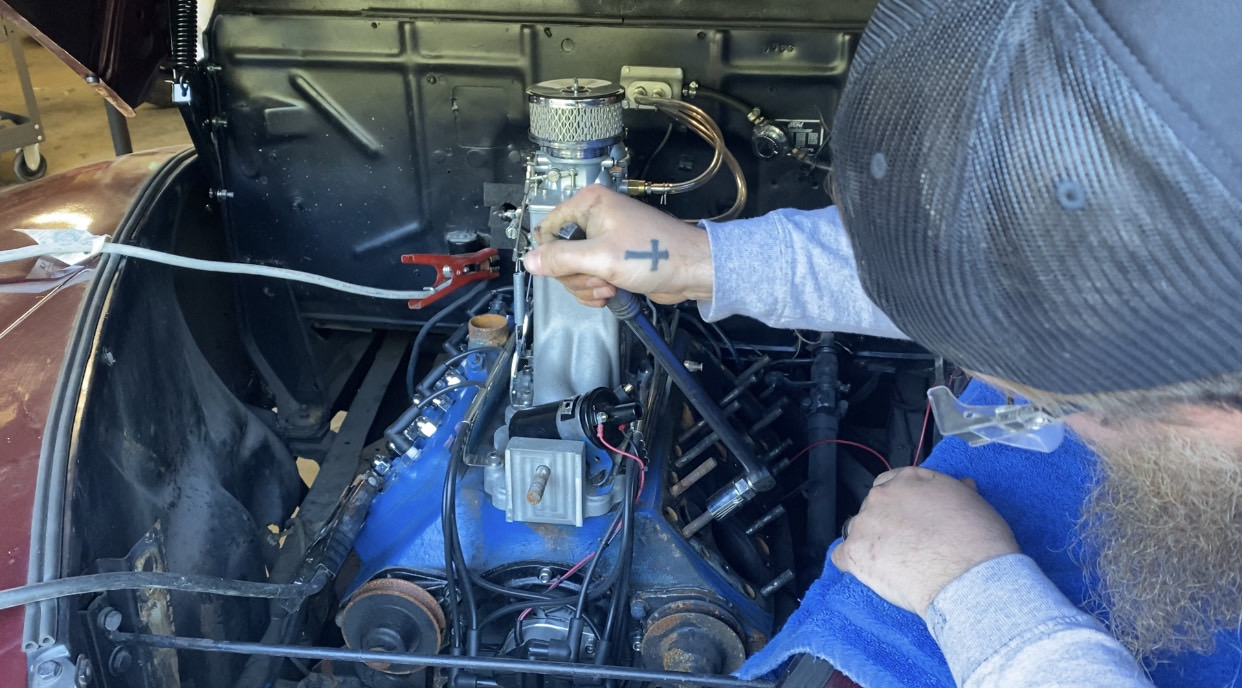 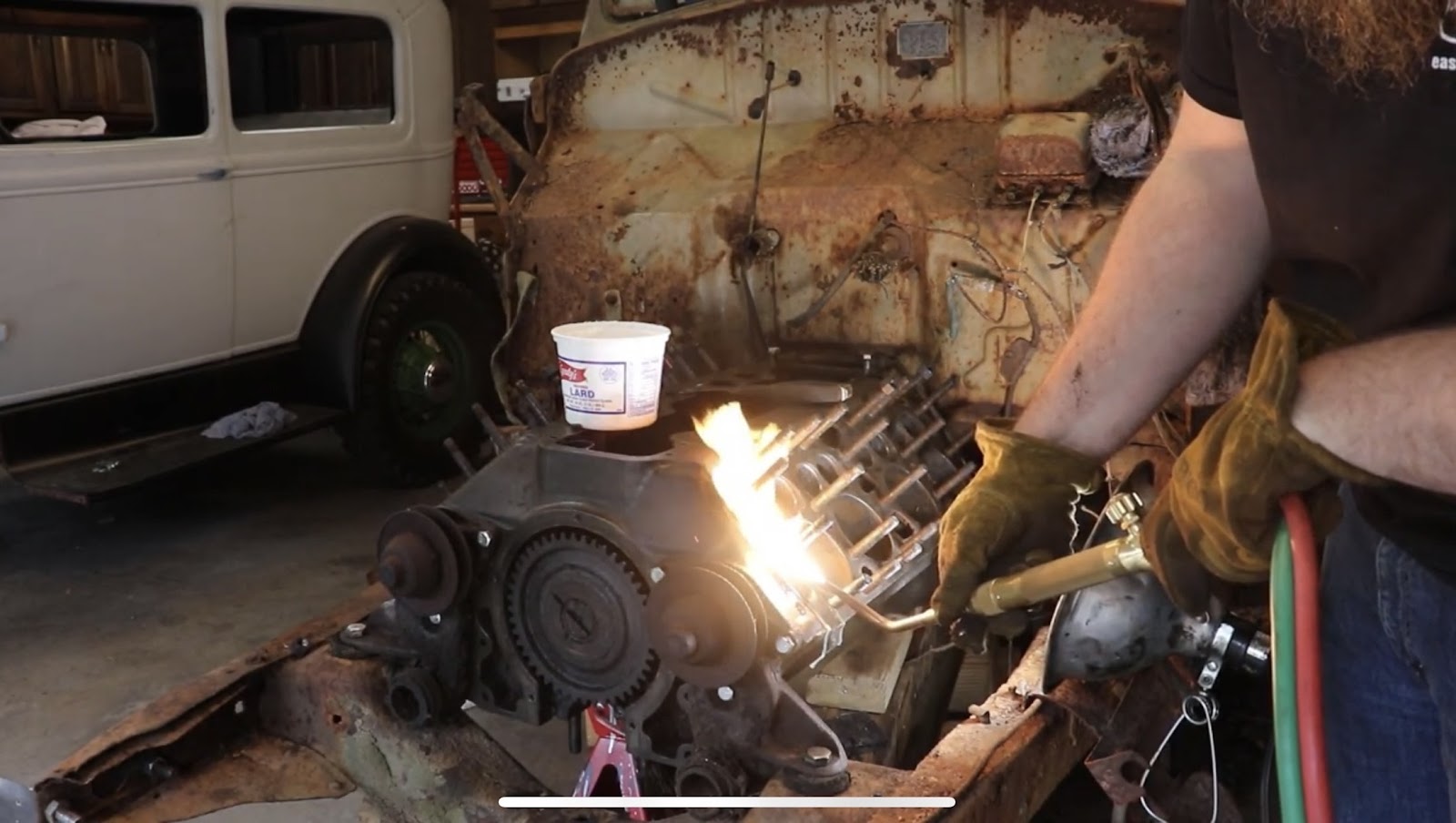 I would recommend vacuuming as you go throughout the process now, trying to keep the the cylinders clean and the coolant passages clear. Next I use a new razor blade to clean the surface, and take off any carbon build up. 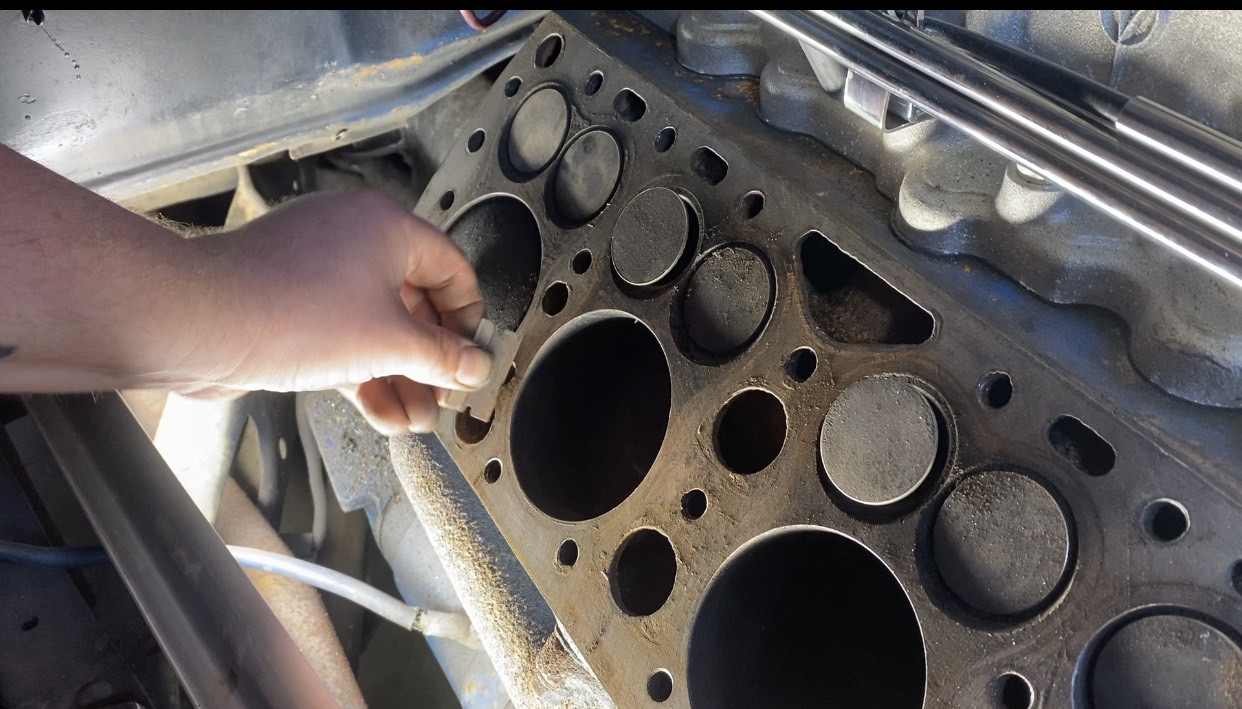 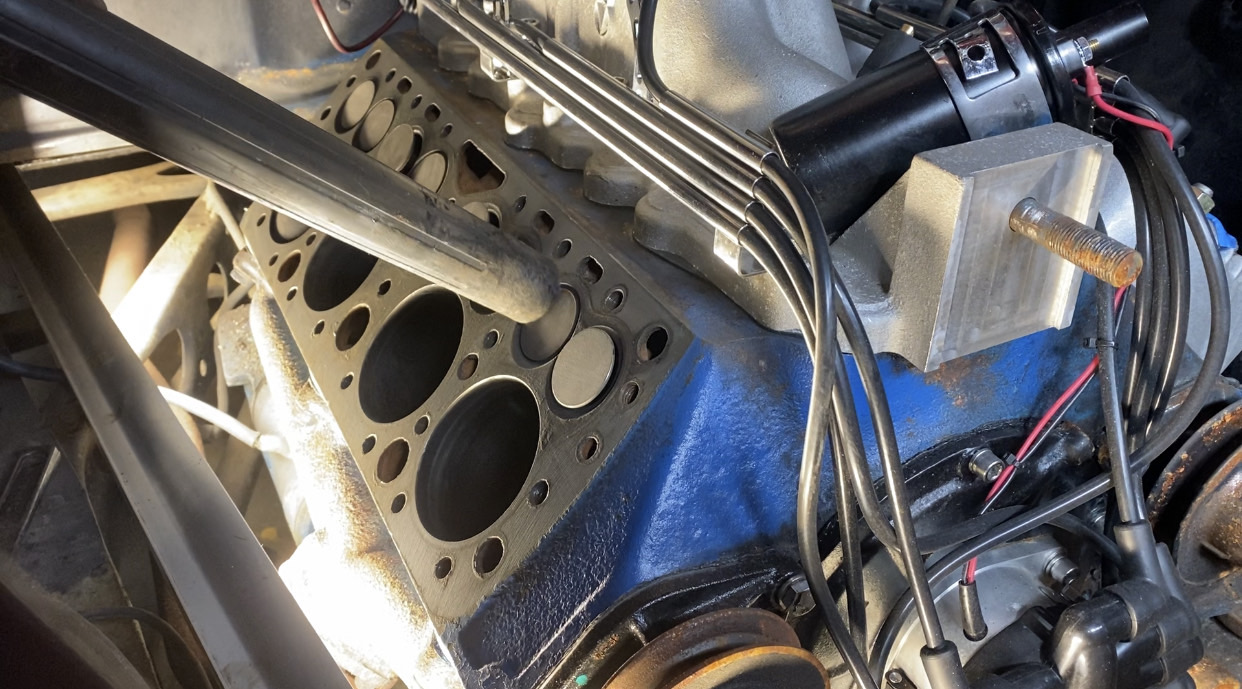 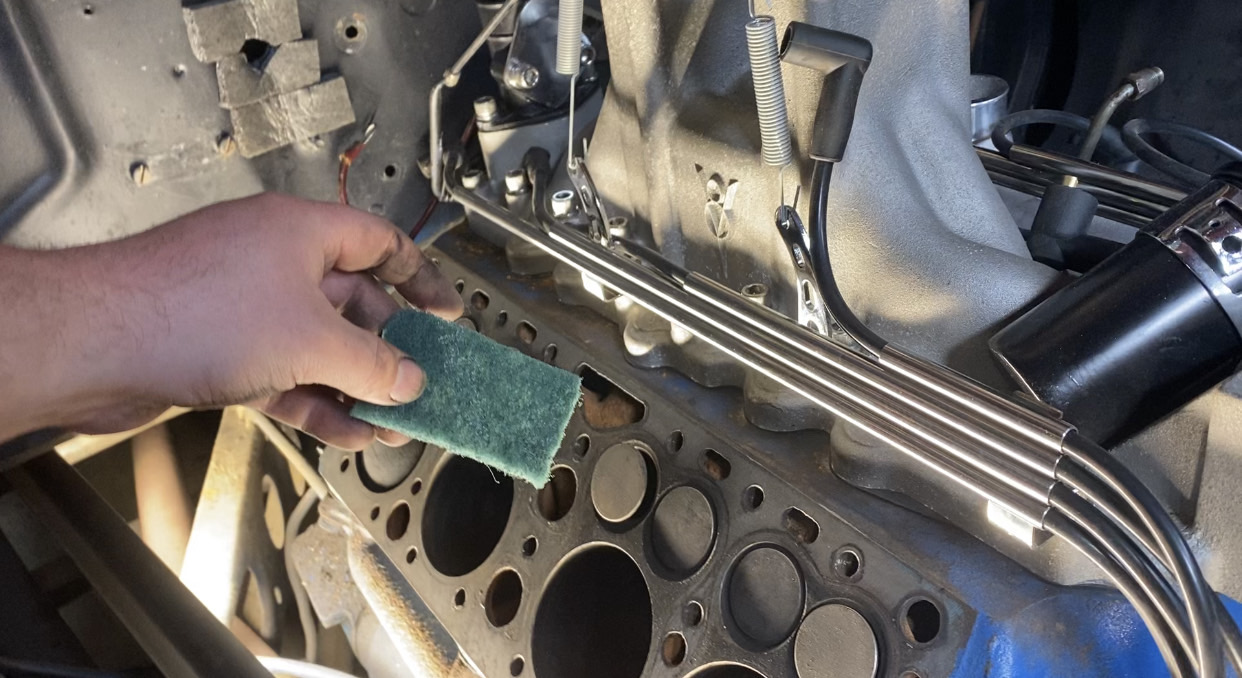 You will need to purchase a 7/16”-14 thread chase and not a tap. Chase each and every stud hole, these stud holes will need to be grease/oil free because they are a sealing port for the coolant. Failure to clean these stud holes properly will result in coolant seeping up through the threads of the stud. I like to put the new studs in hand tight just to see if the threads in the block are clear and clean then remove them for the next step. 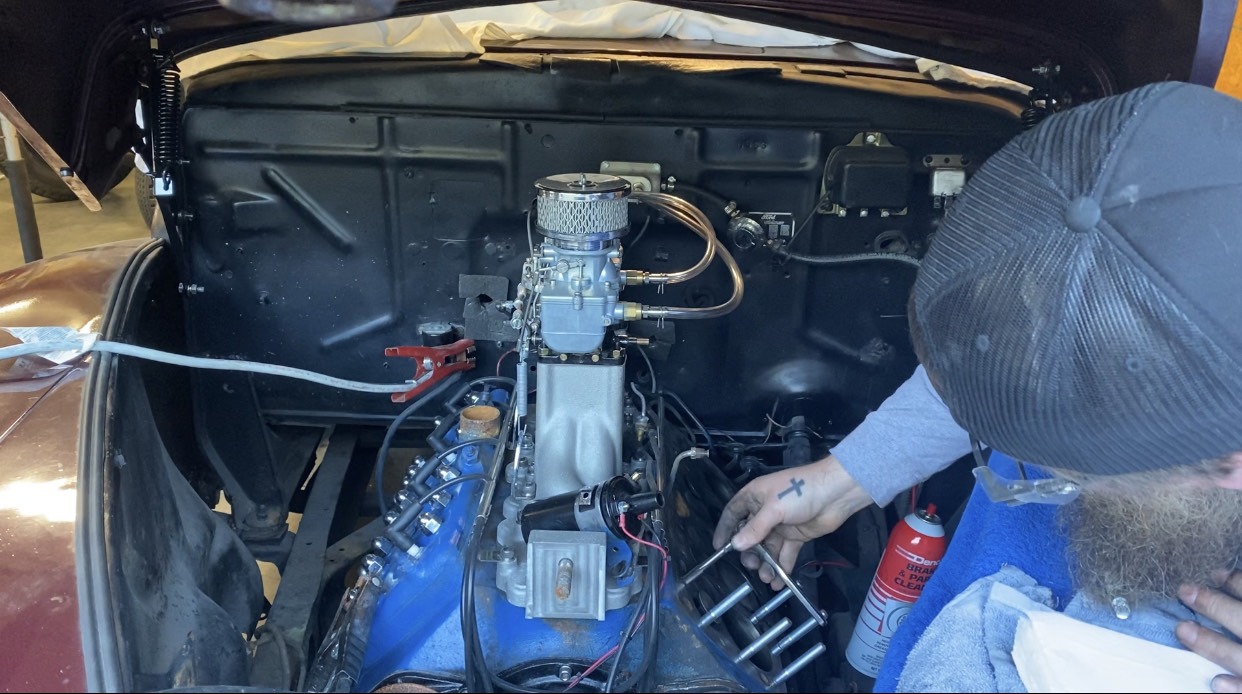 The threads on the stud that goes into the block will need pipe sealer, and not all pipe sealers are the same. Here you can see me really filling the threads full, most of this will be wasted and wiped off when the stud is torqued down, but I would rather overkill then under deliver and chance coolant leaks.

Double nut the stud and insert it into the head. The original Ford manual says they need to be torqued 8-10 Ft Lbs. Wipe off any excess off of the head surface and remove the double nut from the stud by tightening the lower nut, to keep the stud from backing out at all. 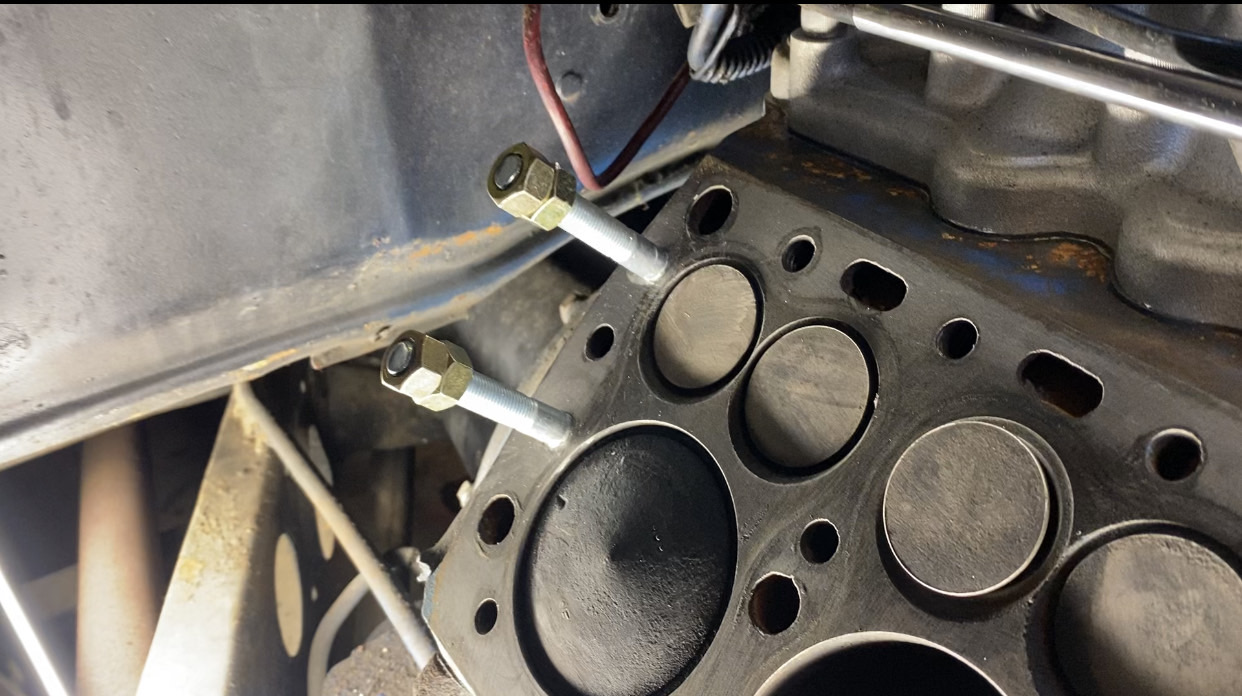 Next you’ll need to try an install the head gasket, I say “try” because you will end up removing it before the next step. Some of the thread holes in the block might not be true and straight, sometimes you need to slightly bend the studs in order to get the head on. I use the gasket to determine which stud needs a little push. Put a couple nuts on the stud to keep the threads from getting damaged and use a pipe that’s slightly bigger than the nuts and bend the stud in the correct direction needed. Note this is for studs just slightly out of place, not for drastic movements.

I recommend using “Best Gasket” copper head gasket. You will also need copper spray, I use Permatex brand. Spray the gasket on both sides throughly, and install onto the block for the final time, be careful not to wipe off any of the copper spray.

Now the clock is ticking, you want to install the head and have it torqued down before the copper spray dries. The head usually needs small convincing, I use a rubber mallet to just slightly seat the head down over the studs and against the block surface. 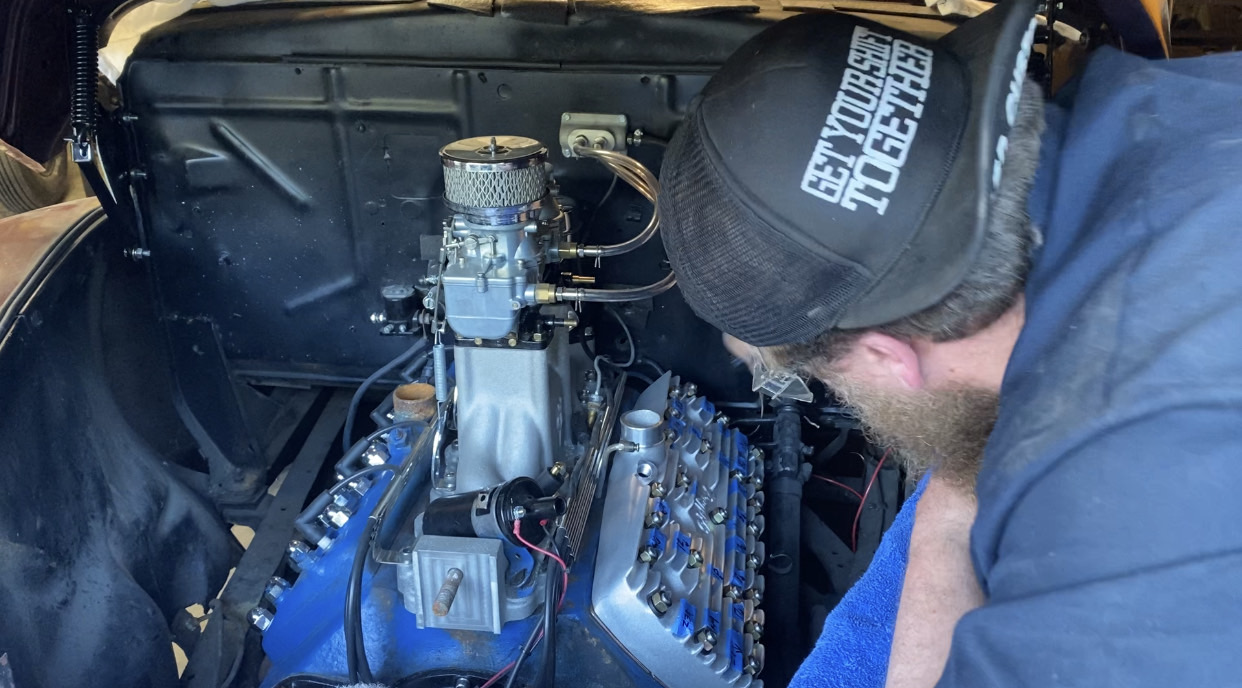 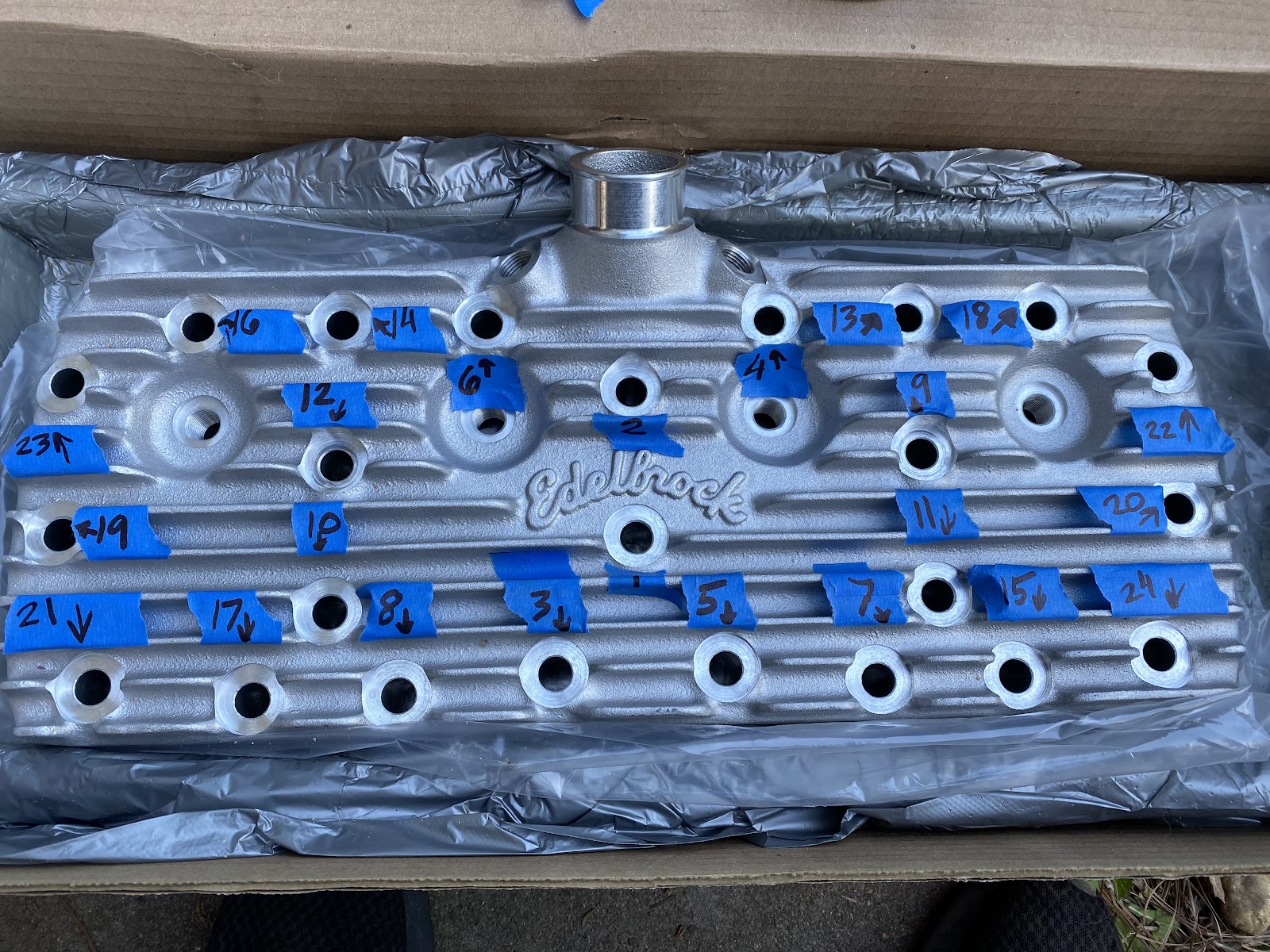 You will need to torque the head down in steps, these steps are not exactly written in stone, following the number sequence, I recommend to torque the heads at 30 ft lbs, then 40 ft lbs making sure each and every nut is it at the step torque before moving to the next step. This is very time consuming as you will find out. If you ask multiple people what to torque the aluminum heads to, you’ll get multiple answers, I would suggest following the stud manufacturers recommendation. 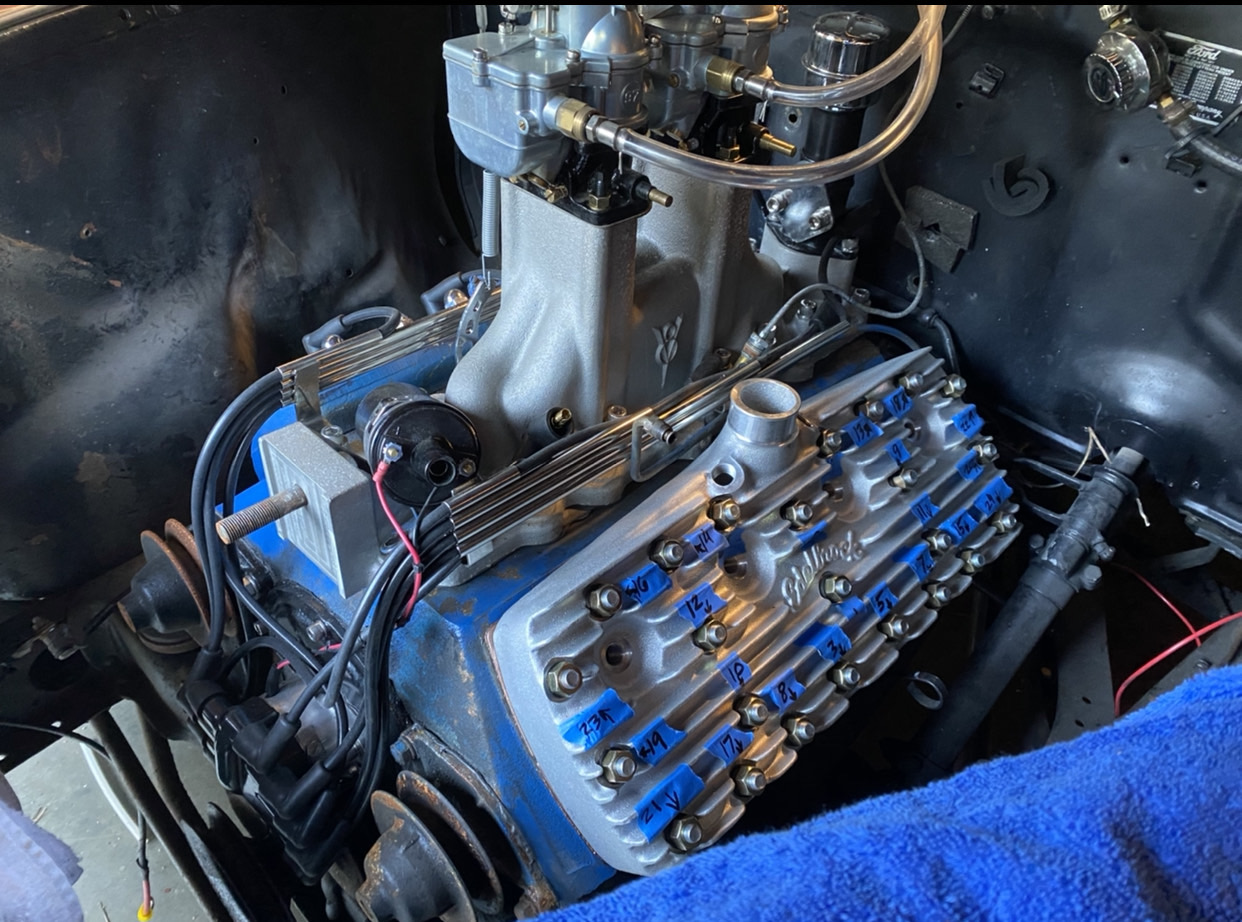 The next and final step is simple. Do not hook up the water pumps or add coolant. You’ll need to run the motor up to temp 180F and re torque the heads to the stud manufacturers recommendation. Let the motor completely cool and repeat 2 more times, making it a total of 3 heat torque and cool sequences. Be careful to not let the motor get hotter than 180F.

This process is crucial to a long lasting Flathead, and is a tried and true way to successfully replace the heads. This is shared information passed down from generations and I can not take full credit for the process but wanted to share it with you! Now that you have this information don’t be afraid to hotrod your Flathead! Now get out in the garage and Get Your Shift Together!

Great article. Just a couple of questions. When I bought my Edlebrock heads, I also bought a set of stainlees steel headbolts. Would the torque values for tightening be different? Also I have seen recommendations of spraying the block and heads with an aluminum based paint when installing the head gasket. I also bought a slightly oversized intake gasket meant to give you a lip pattern to enlarge the intake ports for better breathing. I am running an Edlebrock 4 barrel intake. I’m open to any suggestions or comments you might have. Had my baby since 1965, a ’51 club coupe.

This is a great article & lesson to learn if never done before— as I have never! Is there any way I can get a Copy of this on paper to keep/ review?

I rebuilt my 8BA flathead completely. It’s bored .125 with offenhauser 4 ring pistons. Isky 3/4 cam. Isky adjustable lifters.offenhauser aluminum heads. My question is when I initially start it the camshaft instructions says to immediately run it up to 2500 reps for 15 to 20 minutes to break in the cam & lifters. There for I’ll have the coolant filled the fan belt on it. I was going to do this then idle it down & shut it off to cool. Then I’ll retorque the heads run it again a little above idle until warmed up then shut it off. Let it cool & repeat retorque & run again. Your thoughts on this would be greatly appericated. Thank you so much.

Great article, great information! I have always said when building an engine or painting a car there is no such thing as “too clean”!

Thanks for reading George!

Thanks really enjoyed the article lots of good info thanks again